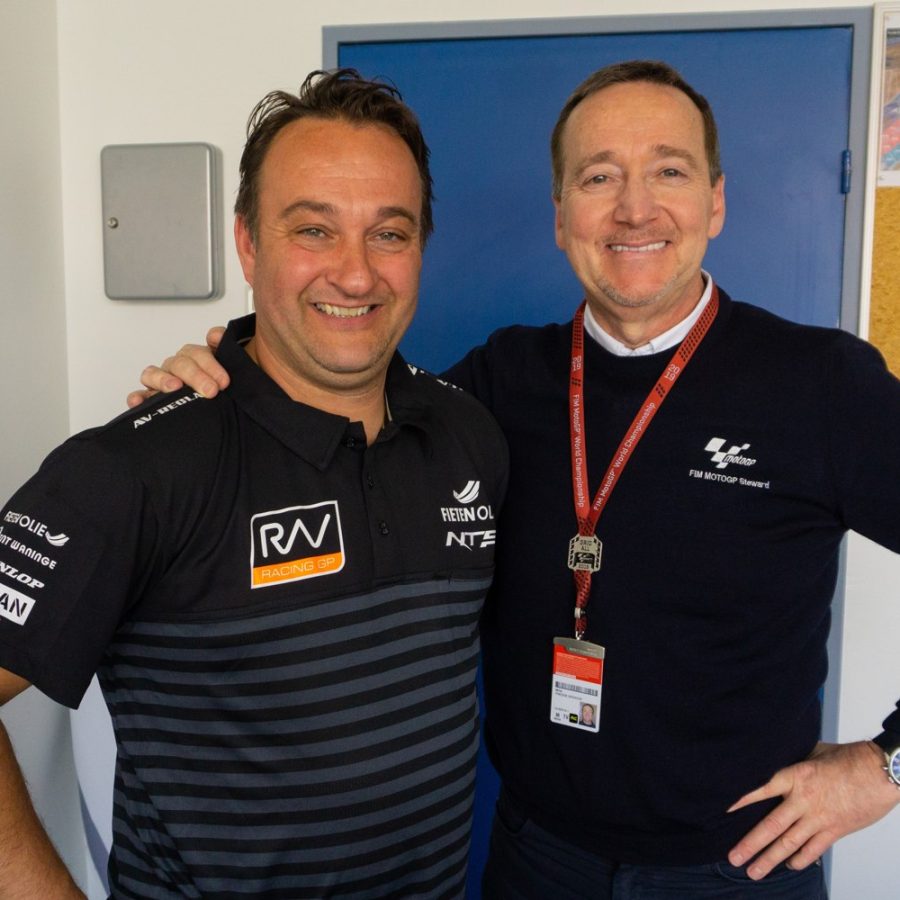 Jarno Janssen: In this sport thanks to Freddie Spencer

In the run-up to the Dutch TT, NTS RW Racing GP brings a daily interview or report to offer a look behind the scenes. Today: team manager Jarno Janssen meets his childhood hero Freddie Spencer.

NTS RW Racing GP team manager Jarno Janssen was about six years old when he went to the TT with his father and saw Freddie Spencer racing. The American, the last to become world champion in two classes in one season (250cc and 500cc in 1985), became the big hero for Janssen. “I had posters of him on my bedroom wall. Without Freddie Spencer I would not have been here.” All the more reason, therefore, for Janssen to visit Spencer, who has been chairman of the FIM stewards committee since this season; the jury that determines the penalties when riders overstep the marks on track.

Jarno Janssen: I was overjoyed at the TT. Everything was just as great, but Fast Freddie stood out. Thanks to you I started racing and eventually became a team manager.

Freddie Spencer: I love hearing that. It is special to have been an inspiration for someone who also ended up in the Grand Prixs. And very nice to meet you now in the same paddock, where you also give something back to the sport that has brought us so much.

Jarno Janssen: You've been out of racing for a while. What made you decide to come back? And why in this role?

Freddie Spencer: I'm glad I can give something back. I was indeed away for a while, but I have always remained involved. That I was asked to be chairman of the jury was a surprise. I had never thought of that myself, but it is a role that suits me, precisely because I never got involved in a role as a team manager or so. I am neutral and I can add something with my experience. I understand how riders think. But perhaps my experience after my active career is even more important. I had a racing school for years. That gives me a different and broader perspective. I love teaching young riders something. And I understand how much racing gives something to others, how it inspires people.

Jarno Janssen: In your time there was no jury yet, hardly any punishments were handed out. Even in my time you had to step way out of line before getting a penalty. If you look back, are there times when you would give yourself a penalty?

Freddie Spencer: Certainly. There is still talk of the race in Sweden in which Kenny Roberts and I fought a fierce duel. The final result of that race was that I became world champion and he didn't. It was on the cutting edge, but fair. We didn't touch each other. Compared to then, there is now much more interaction on the track. Everything is closer together, the competition is much fiercer, so it is not surprising that riders sometimes touch. A lot can happen in the heat of the battle. That is racing. I grew up with dirt track racing; everything is close together there. So I think I can make a good distinction.

Jarno Janssen: Young riders are now under enormous pressure. They have to perform, have limited time. Was that different in your time?

Freddie Spencer: I don't think so. I know the struggles of a 16-, 17-year-old who is judged and considered to be an adult man. Also at Grand Prix level I was always the youngest. Until Marc Marquez I was still the youngest GP winner and world champion. People treated me in the same way as they did to riders who were years older and had much more experience. It is not easy to be "the super talent" and to stand on a pedestal. Dealing with that demands a lot from young people. What has changed is that you now have social media and much more media exposure. That also puts enormous pressure on young riders. I only had to care about one thing and that was racing. Today's riders have much more obligations. I do not envy them and I admire the team managers who also have to deal with that pressure from their position.

Jarno Janssen: That is indeed not easy. As a team you are dependent on sponsors and they want to see success. The expectations are very high and it is soon disappointing. But precisely because it is all so close together, it has also become more difficult for a rider to be successful, I think. It depends on so many factors. If there is success, it is up to the rider, if things go wrong, it is up to everything else and the team manager is responsible.

Freddie Spencer: Exactly! And if that rider cannot immediately meet expectations, for whatever reason, sponsors will drop out and it will become even more difficult. Racing today has become big business, and we all have a responsibility in it: the riders, the teams, the sponsors, the circuits. We as stewards too: it is our job to provide the best possible situation for the riders to do their job. We do this by being clear, honest and unambiguous. We all contribute in our own way to the great competition there is nowadays. It is fantastic to be part of it.