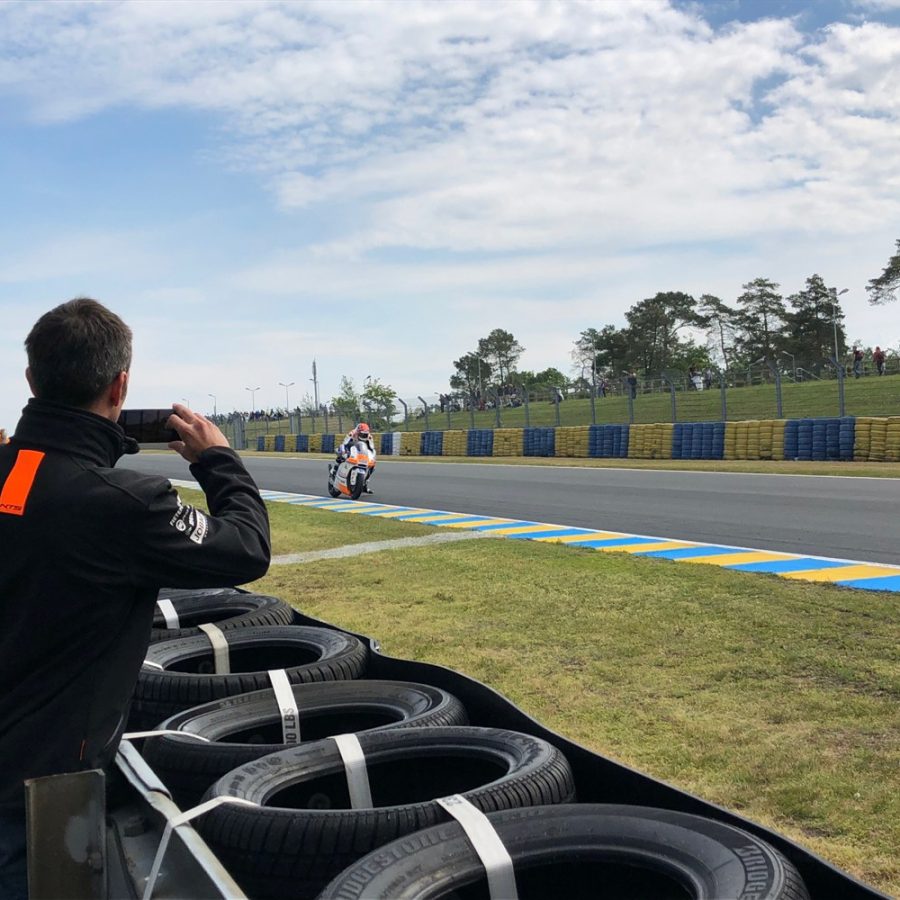 Along the track with Alex de Angelis

In the run-up to the Dutch TT, NTS RW Racing GP brings a daily interview or report to offer a look behind the scenes. Today: along the track with rider coach and test rider Alex de Angelis.

It is Friday morning, fifteen minutes before the start of the first free practice. The MotoGP has just finished and Alex de Angelis steps into the box of NTS RW Racing GP. On Thursday afternoon he already went around the circuit with Bo Bendsneyder and Steven Odendaal to see what the track conditions are like and to discuss the plans for the weekend. As a result, he already knows roughly where the problems were for the riders last year and what the plan is for the training sessions.

"I always start at the most difficult corners of the circuit," says De Angelis, en route to his first stop. "I raced on all circuits as a rider myself and therefore I know where the potential problems lie and thus where there is the most to gain."

Not only did he ride many different bikes in his active career, from factory equipment to ART machines. Because of his broad experience, NTS asked him last year to help with the development of the current machine. As a test rider, he started working with the NTS frame for the new Triumph engine. "The frame came from the drawing board," De Angelis says. “But ideas that look very good on paper do not necessarily work in practice. I have tested six or seven times and the NTS has been drastically adjusted based on that. The last time I rode the machine was the way it is now. So I understand what Steven and Bo feel and mean and I can make the difference between problems with the setting, with the chassis or simply with the rider's style.” 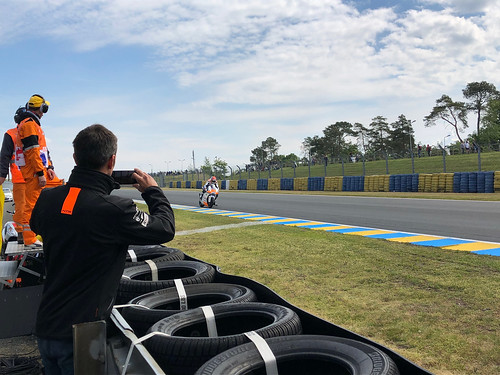 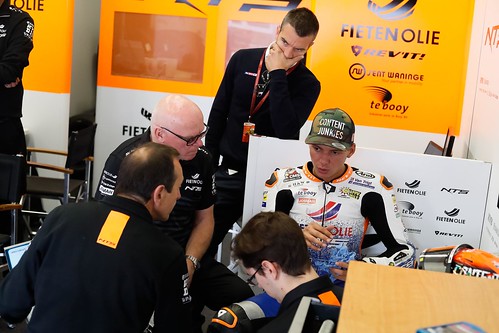 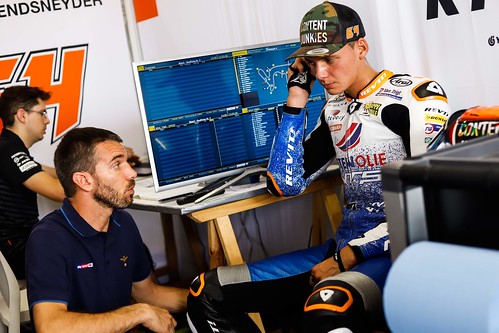 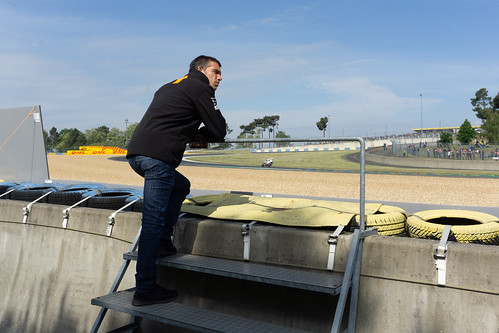 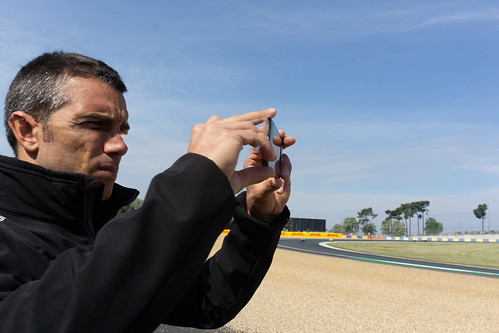 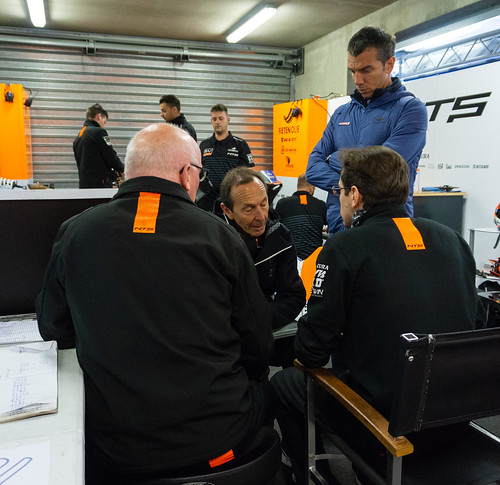 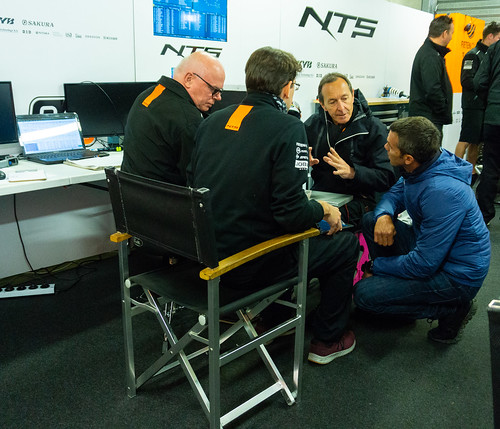 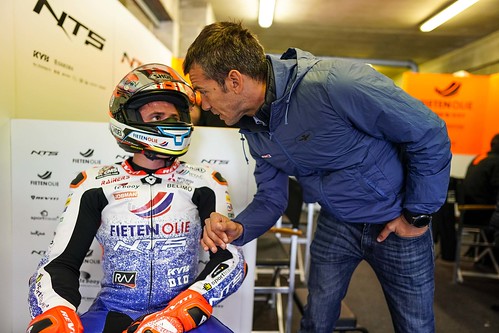 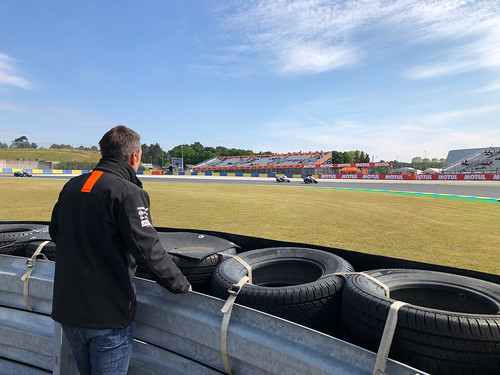 Arriving at the first stop, De Angelis carefully searches for his position. "I stay in the same place to see the differences," he explains when he picks up his phone. After one or two laps he has seen and heard how the Moto2 riders cut the corner, where they brake, where they put the bike upright, where they go on the gas and when they switch gears, and it's time to record those differences by making short videos.

“I keep an eye on a couple of riders: Bo and Steven of course, but also the top 5. By staying in the same spot for a few laps, I see whether the way they make a corner is structural, an attempt, or a mistake."

A few corners further on, the process repeats. De Angelis watches, listens, films, looks at the lap times on the large screens along the track and makes a few notes.

Back in the box, he listens as Bendsneyder and Odendaal go over their findings with their respective crews. "I only listen, without interfering," De Angelis says. "Later I will tell the riders and the crews what I have seen and what might be possible solutions in my opinion."

In between the sessions, De Angelis processes his videos. He extracts stills from the moving images and then indicates the differences that he has noticed with lines and arrows, before sending them to Bendsneyder and Odendaal. “I don't say what (I think) they should do, I just indicate the differences with what others do. For example, whether Alex Marquez is a meter closer to the curbs or hanging further next to his machine. Or whether Tom Luthi takes that turn in second or third gear. They are suggestions and the riders have to decide for themselves what they do. I only show what others do and how their lap times are established.

I never had a rider coach myself and I thought I hadn't missed anything, but now that I do this work, I understand what a hugely valuable addition it actually is. A coach does not make riders better or faster, but it helps to be faster sooner and thus create a better position. That makes it easier in the race."