The start of RW Racing GP

Roelof Waninge has been a race fan for years and – with his company Sent Waninge – as a sponsor involved. When due to financial problems the then Team Molenaar has to withdraw from the 125cc in January 2011, Waninge takes over. RW Racing GP contracts the talented Spaniard Luis Salom, who was with the Molenaar Team in 2010 already, as the single rider for 2011. 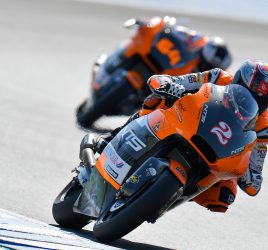