Bendsneyder and Aegerter can’t cash in on excellent start

A razor-sharp start and an excellent first lap could not prevent Bo Bendsneyder and Dominique Aegerter from finishing without points in the Moto2 race of the Czech GP. Bendsneyder finished 18th, Aegerter 21st. That was not the result that NTS RW Racing GP had hoped for, but the race did clarify a number of things that the team will have to work on.

The first lap was often Bo Bendsneyder’s achilles heel, but in Brno he moved from seventeenth place on the grid to twelfth in the first lap. Unfortunately he could not hold on to that position and after a few good laps the Dutchman slowly but surely dropped down the order. In a group of four, with Tom Luthi, Marcos Ramirez and temporary teammate Dominique Aegerter, Bendsneyder tried to keep it up as long as possible.
Aegerter also got away well from 22nd place on the grid and fought a fierce duel with his fellow countryman Luthi for many laps. The latter eventually managed to outwit both Aegerter and Bendsneyder. Due to a small mistake in the final phase, Aegerter had to give up twentieth place to Edgar Pons at the last minute.

Bo Bendsneyder: “The first lap was very good. It was a weakness of mine that I worked hard on. It didn’t always go well, but now it was great. We knew that I had a really good feeling with new tires for two, three laps and I tried to take full advantage of that. I was in the right place and really felt that I could go along. But after three laps, when the grip level dropped, I couldn’t do anything anymore. Fortunately, I was able to keep the pace fairly constant, but after such a good start the outcome is a disappointment. I keep working hard on myself, but it is now also clear that the bike also needs to be improved to be able to last a whole race distance. It is partly due to the new front tire, but we really have to work hard on that as a team.”

Dominique Aegerter: “My goal was to fight for points and stay as close as possible to my teammate. After the warm-up I had a really good feeling. The start was not so bad and in the first ten laps I was able to fight in the group. After that it became more difficult to keep the pace. It is a pity I couldn’t show the full potential as the bike and the team are simply working very well. It was a good experience and although I wish Jesko Raffin a speedy recovery, it would be nice to ride the NTS once again. We’ll know more about that shortly.” 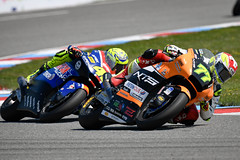 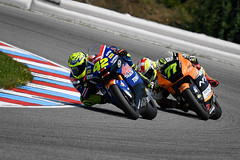 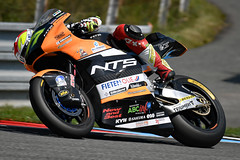 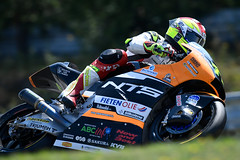 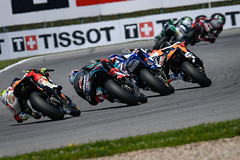 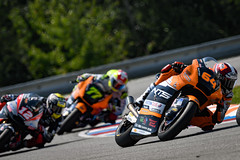